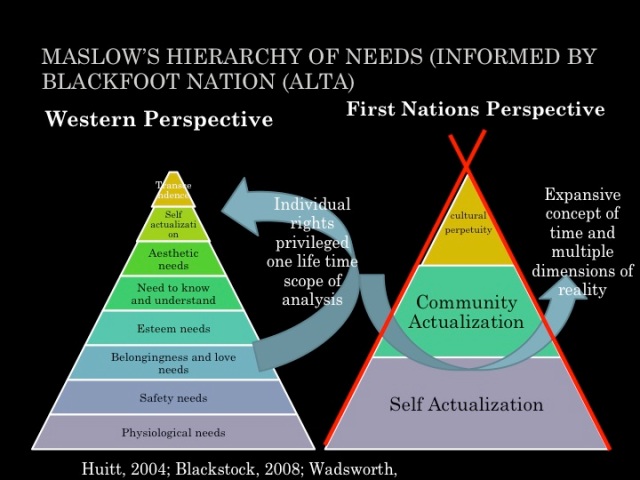 This slide shows basic differences between Western and First Nations perspectives, as presented by University of Alberta professor Cathy Blackstock at the 2014 conference of the National Indian Child Welfare Association.

I first heard of Maslow’s hierarchy of needs in an advertising course I took in college many years ago. I remember looking at the pyramid and its five layers – with basic needs at the bottom and “self-actualization” at the top – and thinking that self-actualization belonged in the foundation.

It turns out I was thinking like a Blackfoot.

At a conference last week of the National Indian Child Welfare Association, I learned that Abraham Maslow, one of the founders of humanistic psychology, borrowed generously from the Blackfoot people to refine his motivational theory on the hierarchy of needs.

Briefly, Maslow’s theory suggests that humans are motivated to fulfill first the most basic of needs, such as food, clothing and shelter. Once those needs are met, they move on to the need for safety and security. The needs become progressive, advancing to love and intimacy and then self-esteem before reaching self-actualization. The highest level is where humans are self-aware and grow to achieve their individual potential.

“This is a rip-off from the Blackfoot nation,” University of Alberta professor Cindy Blackstock told her workshop audience on Wednesday.

Blackstock, a member of the Gitksan First Nation, serves as executive director of the First Nations Child and Family Caring Society of Canada. With 25 years of social work experience in child protection and indigenous rights, her promotion of cultural-based and evidence-informed solutions has been recognized by the Nobel Women’s Initiative and the Aboriginal Achievement Foundation.

It was then, Blackstock said, that Maslow learned of Blackfoot beliefs that shaped his model. He later introduced his hierarchy of needs concept in his 1943 paper, “A Theory of Human Motivation.” The theory and the triangular graphic depicting the needs are among Maslow’s best-known works.

“First of all, the triangle is not a triangle. It’s a tipi,” Blackstock said. “And the tipis in the Blackfoot (tradition) always went up and reached up to the skies,” she said.

Blackstock explained cultural perpetuity as something her Gitksan people call “the breath of life.”

“We have been given the ancestors’ teachings and the feelings and the spirit. We can do a couple of things with that. We can say that what we know is inadequate and that we’re not Indian enough and that we don’t know enough about it or we don’t want to pass it on. And we hold our breath and our people stop. Or you can nourish that breath. You can breathe in even deeper the knowledge of others and understand it at a deep level and then breathe it forward. That’s the breath of life,” Blackstock said.

The Blackfoot call it “cultural perpetuity,” but Blackstock says it essentially holds the same meaning as the Gitksan breath of life belief.

It’s an understanding that you will be forgotten, but you have a part in ensuring that your people’s important teachings live on.

Sitting in that college classroom more than 30 years ago, Maslow’s theory underscored to me how different my world view is from his concepts. Yes, I agree that basic needs must be fulfilled. Just watch an episode of “Survivor Man” on cable television to understand how crucial it is to have access to water, food, shelter and safety.

It’s more than that. It’s understanding one’s place in the world and acknowledging it. It’s realizing each day that I have been blessed with basic necessities and giving thanks for them. It’s doing my part to help my community and the greater good. Hopefully, these teachings practiced by my generation will inspire the next generation to take hold of them so they will endure.

I see things differently than Maslow saw them. My world view is based on my Ho-Chunk teachings. That’s what motivates me.